To understand how and why Syrian government forces used chemical weapons at this scale and with such persistence, we have identified patterns within our dataset. It is from both consistencies and outliers among the incidents that we can draw analytical inferences to provide the basis for a more comprehensive understanding of the role that chemical weapons have played in the Syrian conflict. As a first step, we scour the dataset for connections between attacks, which helps us reduce our massive dataset to a handful of identifiable attack patterns. We then draw on our knowledge of conventional military and humanitarian developments, supplemented by qualitative research, to place these patterns in the broader context of the Syrian civil war.

The first and most important material pieces of evidence recovered from most attack sites are remnants of chemical munitions. Whether spent or intact, these tell us a lot about the shape and evolution of the Syrian chemical weapons program. In addition to the forensic information gleaned by chemical and ballistics experts, we can review the specifications of dozens of these remnants to identify specific munition types. This approach is especially fruitful in Syria, where almost all chemical weapons attacks, including those involving highly volatile and dangerous nerve agents, were executed using domestically produced improvised munitions designs. Out of 349 incidents, only three are known to have involved Soviet-era munitions specifically designed for chemical warfare. 1 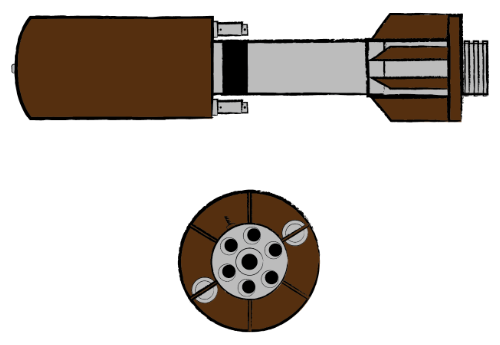 According to weapons experts at Armament Research Services (ARES), the origins of the most common build of improvised rocket-assisted munitions (IRAMs) carrying chlorine – employed primarily around Damascus from 2017 and in northwestern Syria in 2019 – can be traced back to conventional IRAM designs used by Hezbollah and Iranian-linked groups in Iraq in the mid-2000s. The 4th Armored Division of the Syrian Army, which employs both the conventional and chlorine versions of the rocket, reportedly maintains close ties to Iran-backed forces in the country and was thus able to draw on the design and production experience of its allies.

The model’s high-explosive version and its chemical variant share both minor and major design features, including “twin well” fuses at the bottom of the specifically fabricated payload container. These designs are fired in salvos of 3 to 10 rockets from dedicated launchers. Given the munitions’ poor aerodynamic profile and crude assembly, ARES experts judge them as “particularly inaccurate and imprecise.” They estimate a maximum range of no more than two kilometers for the conventional variety, likely less for chlorine payloads.

Loyalist fighters were careful and prioritized the use of these imprecise and short-ranged missiles against hardened rebel trenches and tunnels that insurgents had dug along frontlines in and around Damascus as well as the mountains of Latakia. A commander from Faylaq Al-Rahman, one of the major rebel groups near the capital, described how government forces avoided firing at open positions “where [government] forces were close to [rebels]” for fear that the wind would carry the gas back into loyalist trenches 2. Such precautions, however, would not save rebel forces from regular encounters with weaponized chlorine in the tunnels and trenches of Jobar and Ein Tarma.

In fact, government forces even relied on home-made munitions for the delivery of notoriously dangerous nerve agents: In the 21 August 2013 Sarin attacks outside Damascus, it fired salvos of so-called Elephant Rockets into opposition-held enclaves. We know these improvised rocket-assisted munitions (IRAMs) are part of the government arsenal because we have seen the same design, both in its conventional and chemical configurations, employed by loyalist forces multiple times before and after the attacks. In 2017, foreign reporters even visited a refitted steel factory outside Latakia where these munitions were manufactured. 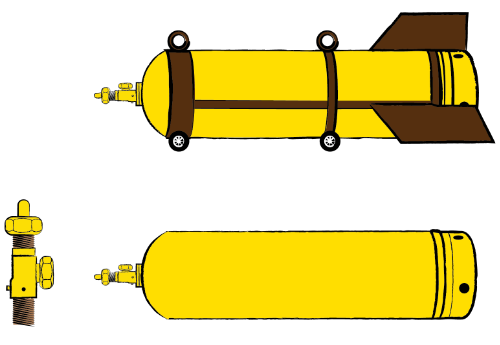 The initial attempts at development of air-delivered chlorine munitions in the spring of 2014 very clearly drew upon conventional “barrel bomb” designs in use by government forces since August 2012. Like their conventional counterparts, chlorine barrel bombs are delivered almost exclusively via the Syrian Arab Air Force (SyAAF) fleet of Mi-8/17 transport helicopters. Instead of high explosives and shrapnel, industrial gas vessels were lodged inside metal drums, occasionally wrapped with detonation charges to ensure rupture and dispersion of the gas.

Eventually, government engineers developed a simpler, more functional munition design by using a welded steel “cradle” to convert a single, usually yellow, standard industrial chlorine cylinder into a crude but functional munition. Remnants of this type have since been recovered from dozens of sites across Aleppo, Idlib, Hama, and Rural Damascus, including the site of the infamous 7 April 2018 Duma attack.

The complete contraption features stabilizing tail fins, two carrying “eyes” for easier loading and transportation, and two small sets of wheels that make it easier for the munition to roll off – two at a time – a ramp installed in the back of Mi-8/17 “Hip” helicopters. No explosives are needed, as the high-pressure cylinder – or its valve – is expected to rupture on impact. This design appears to have superseded all other previous chlorine barrel bomb variants and has been in exclusive use since late 2016.

Despite the inclusion of tail fins, such munitions would prove near impossible to target accurately. Even if it were possible to consistently hit the intended targets with precision, the chemical payload itself would nonetheless disperse in indiscriminate fashion. According to expert assessment from ARES, each air-delivered chlorine munition has a usable volume of 50 to 60 liters, enough for around 71 kilograms of liquefied chlorine – roughly 22 cubic meters of pure chlorine gas or up to 27,500 cubic meters dispersed in air at lethal concentration of 800 parts per million. Theoretically, this would be enough to douse an area of 120 by 120 meters at ground level – an entire housing block.

In the rare instances where SyAAF crews successfully hit “high-value targets'' (such as the 25 March 2017 attack against an underground hospital in Al Lataminah), the attack usually took place during daylight hours. Our data, however, shows that three-fourths of time-recorded incidents occurred in the dark, i.e., after nightfall and before daybreak – on the tail end of daily helicopter operational patterns across Syria, which mostly adhere to daylight hours (only 24 percent of flight activity takes place after dark) 3. Indeed, while impeding targeting, late nights and early mornings are generally considered ideal for the deployment of chemical weapons because accompanying inverted atmospheric conditions favor the dispersion of gas.

We take our munitions typology and map the appearance of these missiles and bombs in different places over the course of the war. For example, a simple geographic breakdown of broad munitions types employed in different theaters of war suggests a clear divide between Syrian forces leading the chemical campaigns in the Northwest and Aleppo region, where air-delivered barrel bomb-type designs account for 91 percent of all attacks, and the Damascus theater, where ground-launched missiles and mortar grenades account for almost the same overwhelming share. Exceptions to these rules, where formations normally associated with one type of attack appear on the other side of the country, help us narrow down our search for the culprit.

In the case of air-delivered chlorine barrel bombs, we can draw sophisticated conclusions by overlaying chemical weapons attack patterns with the deployment history of Syrian military helicopters as well as loyalist military operations. This task is considerably aided by material attrition of the Syrian air force. Based on open-source information and analysis of satellite imagery, experts from IHS Janes suggest that, as of July 2018, only 10-15 of the 51 Mi-8/17 helicopters on the SyAAF books remained operational. 4

Often described as an elite formation of the Syrian military, the Tigers and their commander, General Suheil Al-Hassan, are commonly credited with pioneering the systematic use of explosive barrel bombs in the early years of the war. In 2017, more than 40 UN member states pointed the finger at Hassan and his air force intelligence associates for coordinating the first chlorine barrel bombing campaign of the conflict in the aftermath of a UN-OPCW investigation into chlorine incidents in Sarmin, Qamenas and Tal Manis in 2014 and 2015.

Since then, waves of conventional and chemical barrels have followed wherever Al-Hassan, or the Tiger, and his fleet of helicopters have gone. The task of tracking their deployments became significantly easier in 2016, when civilian activists set up an integrated system for monitoring Syrian and Russian air operations in the country.

From their home base at Hama Airbase …

… and then returned to Hama Airbase to fly attacks in Hama and Idlib province.

In the summer of 2017, the Tiger Forces deployed to Tiyas Airbase and Deir Ez Zor Airbase in central and eastern Syria for the battle against the Islamic State.

In September 2017, the Tiger Forces redeployed from central Syria to northern Hama in anticipation of a Russian-led offensive against the rebel-held Northwest pocket. The flight-tracking shows a corresponding Mi-8/17 activity shift from Tiyas Airbase toward Hama Airbase …

… and eventually to the so-called “Vehicle School” forward operating and helicopter base established 20 kilometers northeast of Hama city. This small base accounted for 61 percent of all Mi-8/17 departures in Syria in December 2017.

It is from this base that on 4 February 2018 at 9:02 pm, a Syrian air force helicopter with the call sign “Alpha 253” departed to drop two yellow canister chlorine bombs on the eastern outskirts of the rebel-held town of Saraqib.

About a week later, on 13 February, the Syrian military announced the redeployment of the Tigers to the Damascus countryside in support of a final campaign to crush the rebel-held pocket in Eastern Ghouta. Again, we can observe the corresponding shift in activity on the air and on the ground.

Beginning on 18 February, Mi-8/17s flying out of the Dumayr Airbase delivered waves of explosive and sometimes chemical barrel bombs throughout the rebel pocket. Local survivors reported that they were stunned and unable to cope with the unprecedented number of indiscriminate munitions.

Sector-specific data collected by first responders even allows us to trace the campaign’s incremental advance through the pocket, day after day, town to town, until the final push against Duma.

In this attack, the indiscriminate bombardment culminated in the two notorious chlorine attacks of 7 April, launched from Dumayr Airbase, which involved two yellow canister chlorine bombs.

In the aftermath of the Battle of Eastern Ghouta, the Tiger Forces moved south to support the Southern Syria Offensive in the summer of 2018 with the helicopters deploying to Khalkhalah Airbase.

The Tiger Forces were neither accused nor targeted during the US-led retribution for the Duma chemical attack. Not until the Turkish intervention in early 2020 did any outside power act to deter the Syrian helicopter fleet.

Chlorine Use in Military Campaigns

As the Tiger Forces example suggests, we are able to associate significant waves of chemical weapons use with major Syrian government military operations throughout the war. Reviewing our data, spikes in chemical weapons incidents clearly correspond to some of the pivotal battles of the past six years – from their first use in the Siege of Homs in late 2012 to the surrender of Duma in 2018.

Confirmed Incidents of Chemical Weapons Use Over Time (by Region)

We can observe the first major spike of chlorine use as government forces were struggling to repulse a rebel offensive in Hama in the spring of 2014. Subsequently, we are able to distinguish significant peaks for the rebel Idlib Offensive of 2015, the Battle for Aleppo in 2016 and the Eastern Ghouta campaign of 2018. Not visible in the charts but noticeable in the data are individual attacks in support of minor Syrian military operations, such as the loyalists’ defense of Deir Ez Zor in 2015 and its capture of Bayt Jinn in 2016.